Jeanne Blasberg is an award-winning and bestselling author and essayist. Her most recent book, The Nine (She Writes Press 2019) has been honored with the Foreword Indies Gold Award in Thriller & Suspense, Juror’s Choice in the National Indie Excellence Awards, and additional awards from Chanticleer, the International Book Awards, Reader’s Favorite, and more. Eden (She Writes Press 2017), is the winner of the Beverly Hills Book Awards for Women’s Fiction and finalist for both the Benjamin Franklin Award for Best New Voice in Fiction and the Sarton Women’s Book Award for Historical Fiction.

After graduating from Smith College, Jeanne embarked on a career in finance. Even as she worked primarily with numbers, she always had an interest in writing. She made stops on Wall Street, Macy’s, and wrote case studies at Harvard Business School before turning seriously to fiction. She has kept a journal throughout her life, eventually taking inspiration from her childhood writings to pen her first novel, Eden.

Both a teacher of writing and a lifetime learnerJeanne is the founder of the Westerly Writer’s Workshop as well as a board member of the Boston Book Festival. She is a student and board member of GrubStreet, one of the country’s pre-eminent creative writing centers, where she is currently developing her next novel. Jeanne’s essays on travel, writing, parenthood and more have appeared in The Huffington Post, Indagare, The Boston Book Blog, diyMFA, Grown and Flown, Dead Darlings, The Jewish Book Council, Squash Magazine, Adoptimist.com, and many others.

Jeanne and her husband have three grown children and split their time between Boston, MA and Westerly, RI. When she isn’t writing, she can be found playing squash, skiing, or taking in the glorious sunsets over Little Narragansett Bay.

“Jeanne is a great communicator and very supportive of her novice writers. She was able to create a bond between all of the participants and offered kind direction to each. She challenged us to be creative in fifteen minute blocks, offering instant insight into the end product. Jeanne graciously shared her expertise and experience, providing useful guidance toward making us better writers. I strongly recommend this workshop for any budding writer.”

Session attendee, The Muse and the Marketplace Conference:

“[Jeanne] managed to speak from her personal experience without making it all about her. She brought in examples of hybrid published books that were very professionally produced and, for the first time, I saw this as an option. It actually took some of the pressure off when meeting with agents.”

PRAISE FOR THE NINE

“The Nine is one of those suspenseful, highly addictive novels that keeps you saying, “just one more chapter” until suddenly you’ve stayed up all night to finish it. Hannah and Sam – the tenacious, devoted mother and her humble, endearing son – make an irresistible team as they take on the dark narcissism and systemic exploitation of an elite world that attempts to break them. I love this book’s iconoclastic impulse and its ultimate faith in the values of work over privilege, and love over loyalty.”
—Christopher Castellani, author of Leading Men 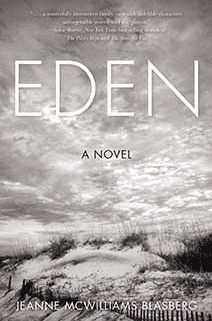 “Eden is not just another farewell-to-the-summer-house novel, but instead a masterfully interwoven family saga with indelible characters, unforgettable stories, and true pathos. Most impressive, there’s not an ounce of fat on this excellent book.”
—Anita Shreve, New York Times best selling author of The Pilot’s Wife and The Stars are Fire