Tag Archive for: julia may jonas 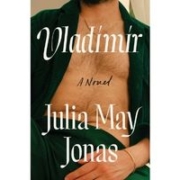 Vladimir by Julia May Jonas

I enjoyed the protagonist’s perspective so much. In Vladimir, a fifty-eight year old female English professor married to the former head of the department in a small college in upstate New York. Her husband has been relieved of his duties after 8 former students write letters accusing him of sexual impropriety. She and her husband have an open marriage seemingly born from her bad body image. Despite her own affairs and permitting her husband’s relations with other women, we catch the unnamed protagonist at a moment when she is coming unhinged, ultimately hatching a plan to kidnap and seduce an attractive new professor. Jonas writes with excellent nuance about all the modern day attitudes around sex and power dynamics. The first two thirds of the book were excellent, if I have any criticism it is the pacing of the last third. I would have preferred a slow but deep conclusion. I have been thinking about this novel for days now and this couple in particular, the detritus they left in their wake, while leading externally admirable lives. Also the cover is not a good portrayal of the literary gem inside – I almost passed because of the cover!!

A provocative, razor-sharp, and timely debut novel about a beloved English professor facing a slew of accusations against her professor husband by former students—a situation that becomes more complicated when she herself develops an obsession of her own…

“When I was a child, I loved old men, and I could tell that they also loved me.”

And so we are introduced to our deliciously incisive narrator: a popular English professor whose charismatic husband at the same small liberal arts college is under investigation for his inappropriate relationships with his former students. The couple have long had a mutual understanding when it comes to their extra-marital pursuits, but with these new allegations, life has become far less comfortable for them both. And when our narrator becomes increasingly infatuated with Vladimir, a celebrated, married young novelist who’s just arrived on campus, their tinder box world comes dangerously close to exploding.

With this bold, edgy, and uncommonly assured debut, author Julia May Jonas takes us into charged territory, where the boundaries of morality bump up against the impulses of the human heart. Propulsive, darkly funny, and wildly entertaining, Vladimir perfectly captures the personal and political minefield of our current moment, exposing the nuances and the grey area between power and desire.

Read more of Jeannie’s Reviews on her blog, on Goodreads or StoryGraph, or on the New York Journal of Books. For more TBR inspiration, check out Jeannie’s curated book lists at Bookshop.org.

Disclosure: If you purchase a book through one of these links, I may make a small commission at no additional cost to you, which I will donate to literary organizations in Boston and across the country. Thanks!