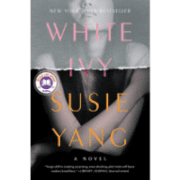 This review originally appeared in the New York Journal of Books. 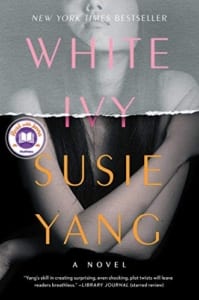 White Ivy is a suspenseful novel with a protagonist who is intentionally portrayed as an anti-heroine. It begins “Ivy Lin was a thief but you would never know it to look at her.” In classic anti-heroism style, Ivy has few redeeming qualities at the beginning of the novel, and although she experiences growth and revelation, she never comes around morally. She steals, lies, prostitutes herself, and even treats her own body like a garbage dump. So the question is: How do we feel about detestable protagonists? Such a structure certainly demands tolerance from a reader and some appreciation for its departure from what we’ve been raised on—characters who transition over the course of a novel and in so doing deliver a universal message of hope or possibility.

Can we enjoy novels with protagonists we don’t like? There are plenty of male anti-heroes, the Humbert Humberts of the world, detestable protagonists we end up rooting for despite their faults. The fact is the reading public is especially hard on female characters who do not adhere to stereotype, who are not kind and thoughtful and domestic, or do not at least come around to these attributes by novel’s end. Because of this, one can hold White Ivy up as a work of art that challenges societal bias. It receives five stars on that measure, if only three stars on the whole.

In classic anti-heroism style, Ivy has few redeeming qualities at the beginning of the novel, and although she experiences growth and revelation, she never comes around morally.

On the other hand, the jacket copy describes the novel as one that offers “sharp insights into the immigrant experience.” That statement is pure marketing and potentially exploitive. Ivy Lin is a very complex individual as are the members of her family. One would hate to think that Susie Yang wrote Ivy Lin’s character or the Lin family in general to be representative of Chinese Americans. If that is the case, it paints an extremely negative and troubling picture.

In addition, for a story primarily set in Boston and fictitious towns surrounding the city, it fails to offer authentic details. In fact, there are several erroneous details, creating lapses in credibility that trip up the reader and diminish her eagerness to go along with the narrator on a journey that already demands she withhold judgement on Ivy Lin’s character. For example, bad winter weather usually comes in from the west, not the north, and not from the Atlantic; when leaving Boston one does not drive through upstate New York in order to get to New Jersey; there is no block on Beacon Hill where there are rows of identical front doors; a state senator works in Boston and not in Washington. While Yang writes well and employs fine use of metaphor, occasional poor grammar and word choice threaten to startle the reader from the fictive dream she is working hard to establish.

Ivy Lin grows up in a poor family but attends a private school in Massachusetts on account of her father working there. It is at this school that she develops a crush on Gideon Speyer. After lying to her parents in order to attend a slumber party at his home, Ivy is sent to stay with relatives in China for the summer, and the family moves to New Jersey while she is out of the country. Lin goes on to attend an unnamed women’s college outside of Boston where she reconnects with the Speyer family and drama ensues.

The lesson for the reader might be in the irony—that if you are looking for a real hero, the most self-aware and honest character in this novel is the one you would have least expected.

The early chapters of this novel are enjoyable. The relationship Ivy shares with her grandmother is great, as are her travels and the relationships she makes that summer as a young teen in China. The choices she makes to fit in and survive in her family seem plausible. If this is the description of the immigrant experience Yang is going for, then it’s laudable. The second half of the novel, however, is where plot twists enter around the superficially and simplistically wrought Speyer family and the story succumbs to a downward spiral of baseness.

White Ivy is entertaining insofar as it is extremely original. The conclusion left this reader without a sense of hope, depressed over an ending that rewards self-centered opportunism. The final scene is one where Ivy faces off against Gideon’s sister, Silvia Speyer, in a contest of innuendo between two equally loathsome human beings. However, maybe that was the point. The lesson for the reader might be in the irony—that if you are looking for a real hero, the most self-aware and honest character in this novel is the one you would have least expected.