Because when we built the house, the room behind the kitchen represented the structure’s fulcrum.

Because I became enamored with the bright layout in a design magazine (or maybe it was Pinterest or Housz) representing a bespoke moment of well-rendered functionality, a desktop that at first glance was no more than a continuation of the kitchen’s long, white, marble counter.

Because a workspace in the pantry was domestic aspiration, enabling a seamless glide between ideas on my laptop and soup simmering on the stove.

Because it would house the coffee and espresso makers and a cute little appliance that froths milk, drawing in family members through morning ritual, with an inevitable good morning to me.

Because in an empty nest, the hum of a refrigerator and the dog lapping from his water bowl make a comforting soundtrack by which to work.

Because a pantry doesn’t take itself too seriously, messy with shopping lists and unread mail, and old photos of the kids jumping from boats.

Because this would be a summer house where we lived on fresh veggies and seafood, because we ate out with friends, and the pantry shelves were another luxury, haphazardly stocked with tea and candied ginger and nectar for the hummingbird feeder.

But on the vernal equinox, March 21, 2020, this summer place would become our port in the storm and the pantry would become command central.

And the adult children would return to fill more than coffee mugs, looking to me and my pantry for three square, that would make five adult appetites folks, fifteen meals per day plus snacks going on eighteen weeks now. 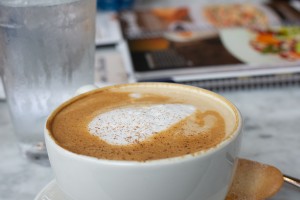 And in my daughter’s despair she expressed a desire to adopt a puppy, and I said “okay,” and that it would make the most sense to contain this little creature at my feet, in the pantry.

And before I mastered virtual backgrounds, people I met with on Zoom would ask, “Are you in a pantry? Please mute yourself.”

And I would provision the pantry shelves with military precision, but also guard them. “Don’t use the last of the coconut milk.”

And while some people have library ladders, I installed a ladder in my pantry to reach the upper most shelves. I became a reference librarian, the ins and outs of the pantry’s inventory running through my brain. I woke in the middle of the night, “We have no canned tomatoes.”

And I planned meals like we were shipwrecked. I scheduled food delivery and hunted items on Amazon. Oils, oats, rice, beans.

And we would all grab breakfast and try to smile before heading to work.

And with the two dogs wrestling, I would close the doors to the pantry to keep the little one from escaping and I would coin the pantry “the jungle.”