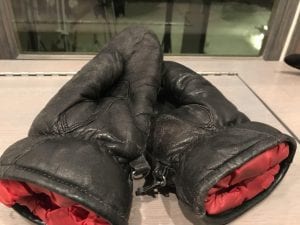 My mother’s mittens are soft and worn, of black leather and insulated with red nylon and down fill. I wore these fifty-year-old mittens every day this past March and wondered what she would have thought of my extravagances: an EPIC pass in my pocket and accommodations just a short walk to the mountain. She was a frugal Yankee who insisted we be first on the lift and not stop until at least 3:30 pm to get our money’s worth. I’d never even set foot in a lodge before spending a ski weekend with a friend’s family because my mom laced up (yes I’m dating us) in the parking lot to save precious time and she carried our lunch in her pockets.

It was the early 1970’s when my mother introduced me to the rope tow at West Mountain in Queensbury, NY. A short distance from her hometown, she’d always make sure we got in plenty of runs during weekend visits to her family. Growing up I’d heard plenty of stories about her love for speed, how she donned a motorcycle helmet and challenged all comers in races to the bottom from the top of the single chair at Mad River Glen.

By the time she skied with me, her knees were done, but she had the prettiest form I’d ever see. She’d offer commentary on the skiers below as we ate smashed tuna fish sandwiches on the chairlift at Gore Mountain, or, if I was lucky, out of the wind on the gondola. When we lived in California during my teen years, ski trips were less frequent but more majestic. It was with my mother I first discovered the beauty of the Sierra Nevadas, the Sangre de Cristo, and the Rockies. And it was during that turbulent time, our rides on the chairlift were some of our only moments of quiet, patient communication.

Unlike me, my three children were introduced to the sport during times of prosperity. My husband was a hockey player and didn’t grow up skiing, and I made him jump through hoops, proving some proficiency on the slopes before I was willing to get serious. To his credit, he went all on the skiing lifestyle, although he refused to schlep through parking lots and demanded a hot lunch. He even invented something called the ’10am chocolate break.’

But he also devised the best-ever family skiing tradition: collecting lapel pins from every mountain we “conquered.” It’s almost turned into a challenge, resulting in several spontaneous exits from the highway to hit small mountains, squeezing in the requisite number of runs to merit a pin (at one point I remember that number being seven or your age whichever was lower). Spurred on by the spirit of wanting to ski more terrain, we skied the east, indulged in trips out west, and reached heights I’d never dreamed of during a three-year stint for his job in Zurich, Switzerland.

Almost fifty years and ninety pins after my first turns on West Mountain, I returned to the beautiful Wasatch this past March to ski and finish revisions on my novel.

Utah was one of our first western destinations with the kids due to the proximity and plentitude of resorts (and pins!). I remember traversing from Alta to Snowbird in a whiteout for the sake of a pin when our youngest was six and acknowledging that we were irresponsible parents and had probably taken it all a bit too far.

Another early destination for our young family was Whistler Mountain, BC. It was toward the top of 7,000 vertical feet, and after a warm lunch in the lodge, that I learned of my mother’s passing. Stepping out into the cold, the clouds were within arms reach and I thought I might try to climb through them to be with her. If not that, maybe she would reach down and place her hand on my back. Blinded by tears, I traversed to the bottom behind our kids before sitting them down and breaking the devastating news.

This March, as the calendar crept toward the anniversary of my mother’s death, I debated how I might spend the day. Ski Utah Interconnect offered the perfect homage: a full day up and over backcountry, getting in runs at six resorts with like-minded souls. (Bonus: there’s a special pin awarded upon completion.) We had spring conditions and my hands were plenty warm inside her mittens. I even enjoyed a fun and festive lunch at Collins Grill in her honor.