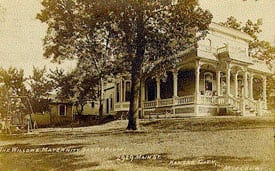 It only makes sense that during the baby boom years after WWII, there would also have been a sharp rise in the number of illegitimate pregnancies. You’ve seen pictures of those soldiers coming home, there was kissing in the streets and presumably a lot more going on! But in the 1940’s, the options for women who were unmarried and pregnant were very limited. Many women and girls were sent away under the ruse that they were needed to care for a sick relative or to go away to school. They would have their children in some distant place and then come home as if nothing had happened.

A primary source of my inspiration for writing Eden came from a conversation I had with a woman who was born in the 1950’s and adopted from a maternity hospital in Kansas City. She enlightened me: Kansas City was the place many of these unwed, American girls went. So much so that it became known as the “baby hub” of the United States, being centrally located and easily accessible by railroad.

My follow up research uncovered facts that really got the writer in me thinking. Thousands and thousands of babies were born in no fewer than a dozen maternity homes that were established in Kansas City. Missouri had progressive adoption laws and the babies were legally placed through the court system. There was great care taken in matching children and families. For example, the appearance of birth parents and adoptive parents was often matched as was religion. There were three institutions that stood out in Kansas City: St Anthony’s, Kansas City Cradle, and The Willows.

The Willows is indeed where I envisioned Becca (Eden’s main character) going in 1945 to have her baby. Of course, just a teenager herself, her mother did the research and made all of the arrangements. Becca traveled to the Willows by rail just as its actual residents did. The real Willows Sanitarium closed for good in 1969 and the story is that the boxes and boxes of files that had been stored in the basement were taken to the backyard and burned, so it may have been impossible for my fictional Lee to really have found Becca fifty years later.

The Willows accommodated approximately 25-30 residents at a time and was known as the “Ritz” or “Waldorf” of maternity hospitals, serving an upper class clientele. It has been estimated that 35,000 babies were provided for adoption by the Willows in its 65-year existence.

The following is a link to an excellent website (from which I sourced data for this blog post) It has original pictures of the Willows and gives more detail about its history: