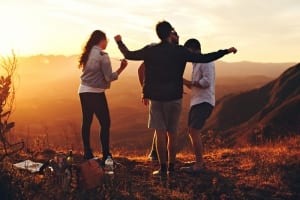 This article was originally published on Medium.com.

The best medicine I found for easing the anxiety of parenting boundary-pushing teenagers was remembering my own risky behavior at their age.…

“One of you has got to call your parents,” said the officer at the Palm Springs police department. We’d been rounded up and taken in when the party we were hoping to attend spilled out into the street. We were all underage but the other kids we knew had parents or grandparents in town, or at least adults who would vouch for them. Jessie, Tina, Sarah, and I, however, had driven to the desert on a lark. FOMO wasn’t an acronym in 1982, but we had a bad case of it. Everyone who was anyone at Newport Harbor High was spending spring break in Palm Springs, a place I had never been before, having recently transplanted from suburban New York.

A totally unstructured April vacation was the culprit. Four girls left alone with nothing to do. The week stretched out in front of us and after way too much daytime TV, we spent Thursday at Disneyland, going not for the typical reasons, but to make mischief. We’d jump off the Snow White ride inside the dark tunnel and try to dislodge as many poisoned apples as possible. We’d scare little kids and their parents in the process, sometimes hopping onto unsuspecting laps in order to dodge security guards. Eventually bored with Snow White, we took over a table at the snack bar and started flinging ketchup-laden French fries at each other, concocting a new plan.

“We can take my car,” Jessie said.

“We can sleep on a golf course,” said Sarah. 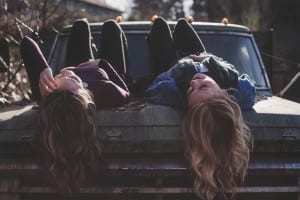 So, I told my parents I’d be spending the night at Tina’s, and the others told similar lies. We packed bathing suits, hairbrushes and makeup and set off on the two-hour drive to Palm Springs. Despite the care we took making up our faces and curling our hair, five hours later, after a brief thirty minutes at the party, we were loaded into a paddy wagon.

I drew the short straw, and picked up the receiver to call my parents at the officer’s request. My father answered, fuming when I told him that I was with three friends at the Palm Springs police department and asked if he could come get us. After a few moments of stunned disbelief, he let me have it. I held the receiver a distance from my ear, shaking my head in my friends’ direction. “Not happening anytime soon.” I announced, hanging up.

Jessie called her mom next. Instead of grimacing like I had, she continued in a soft voice. After a little bit of explanation, she actually started giving her mother directions to the station. She even hung up with a smile. Maybe it was bad luck that my father answered the phone, but I couldn’t imagine my mother taking the news any better.

Jessie’s mom, Jane, however, arrived several hours later, announcing that since it was Friday and we already in Palm Springs, we might as well make a weekend of it. Hoots of delight erupted from the back seat as she pulled away from the curb. I went along with the enthusiasm, all the while anticipating the fallout when I next called my father, “Good news! I’m out of jail, but I’ll be hanging out at the Desert Marriott for a few more days.” He was going to have lots of time to stew over my punishment.

At the hotel, we put on our bikinis then found chaises poolside, aiming to recover from our missed night’s sleep. Jane took time primping in the room before appearing on the pool deck in high heels, a cover-up, and movie-star sunglasses. She distanced herself from us a bit, finding a chaise by the poolside bar. 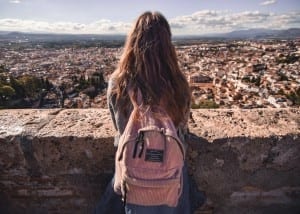 When I woke up, I had a blistering sunburn on my back and Jane had scored a dinner date with a guy named Bill. She’d end up spending all of Sunday with him as well. The romance continued and not long after, back in our beach town, Bill would become Jessie’s stepfather.

A few months later, as the sting of being permanently grounded was fading, I mentioned the pending nuptials to my father over dinner. I chuckled that the “weekend in Palm Springs” had a silver lining after all. He shook his head and muttered something between bites about getting me out of there, about the type of friends I was making.

He should have given me more credit. He should have known that I understood sneaking off to Palm Springs was a bad idea. New to the school and desperate for friends, I remember weighing the pros and cons and deciding to go anyway. I hadn’t enjoyed the weekend at the Marriott, knowing how upset my parents were at home. I learned that I never wanted to go to jail again or suffer my father’s disappointment. I would think for a long time about his response to my phone call as well as Jane’s, and even as a sixteen- year-old, was determined to land somewhere in the middle of that spectrum if I had kids someday. 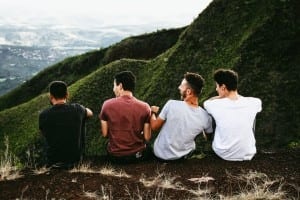 I’ve never caught my kids in that type of lie, but we’ve had our moments. As parents, we can make ourselves crazy trying to prevent bad behavior entirely. The important thing to impart on our children is that while dumb choices are inevitable, so are the consequences. I miss the days when kids had space to make their own choices, good and bad, to learn what it feels like to make a mistake. Unfortunately, unlike in 1982, today’s parents operate under the assumption their kids can’t afford to make any mistakes at all. I don’t know how our culture adopted this zero-tolerance policy, but I don’t agree with it. It might be one of the scarier tests of parenting faith, but humans on the verge of adulthood need to test limits. My parents may have gotten mad as hell, but at least they let me screw up, and in its own weird way, that was a meaningful demonstration of love too.