Disclosure: This page may contain affiliate links, meaning if you decide to make a purchase through one of these links, I may make a small commission (at no additional cost to you), which I will donate to literary organizations in Boston. Thanks! 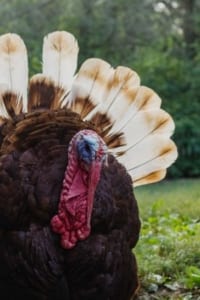 In Jonathan Safran Foer’s recent book, We Are the Weather, he reports that “Ninety-six percent of American families gather for a Thanksgiving meal. That is higher than the percentage of Americans who brush their teeth every day, have read a book in the last year, or have ever left the state in which they were born.  It is almost certainly the broadest collective action… in which Americans partake… forty-six million turkeys are consumed on the third Thursday in November every year.” Although Foer goes on to make a larger point about what makes a movement, I use his findings to emphasize something about the holiday menu: turkey is Thanksgiving.

Dietary changes in our family mean that a majority of us now adhere to vegetarian or vegan regimens. So, in an effort to provide something for everyone, my husband suggested a vegan option this year.  He asked one son to make the mashed potatoes, one son to make the squash casserole, our daughter to make the Brussel sprouts, he’d stuff and roast the bird, and when it came to my assignment (and I wasn’t sure I’d heard him correctly) he said  something about a vegan meatloaf.

“What? Read me the recipe,” I said from the couch, where I was steeped in a novel.

Everyone was listening as he put on his reading glasses and listed the ingredients: tofu, lentils, oats, ketchup, mustard, soy sauce…. 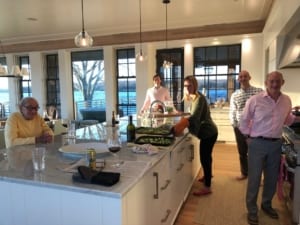 Now let me say, that while my husband was the one to suggest this addition, it seemed I would be the one making it, the one to go down in infamy. (read: Mom always takes blame)  John’s dad had reminded me of this fact only earlier that day. Despite his battling the same heart disease that plagues all the men in his family, that very morning we were making plans for his 92nd birthday party at his favorite Chinese restaurant.

“When you call to make the reservation,” he had said to my husband. “Make sure you let them know about Jeannie’s dietary issues.”

You might think his mentioning “my” dietary issues as a sign of his concern and  thoughtfulness, but in it I heard the reminder that for the past thirty years I’ve been the one imposing all brands of “picky eating” on his poor son.

As John handed me the instructions for the vegan meatloaf,  I cleared my throat. “No way.”

“I am making the executive decision to nix the vegan meatloaf.”  The reason I gave had something to do with keeping it simple, but there was also something of not wanting to be the spoiler mixed in there too.  What Foer writes about is real – the Thanksgiving meal is like a heavy, warm blanket. Even for vegans, a proper Thanksgiving buffet provides a certain visual that is comforting. I knew vegan meatloaf on the Thanksgiving table would not be like an orange on a the Seder plate – rather it sounded like the punchline to a stupid joke.

As a mom (and a daughter-in-law entrusted with the meal),  it has become increasingly clear that the greatest thing I can offer my family, what everyone really craves, is stability and tradition. After the schlepp home, weary from the cruel, cruel world, the Thanksgiving menu does more than fill one’s stomach.  The kids look forward to, and indeed get a boost from our adherence to the prescribed menu. Tradition was hard enough to sustain during the years we lived overseas where finding a turkey was near impossible and we had to assign our eldest son with smuggling Pepperidge Farm stuffing mix and ocean spray cranberry sauce through customs on his way home from boarding school.  Certain staples of our menu are tributes to mothers who are no longer with us. Even the squash rolls take on importance. My father-in-law orders them weeks ahead and stands in line to pick them up at a farm stand on the Cape. 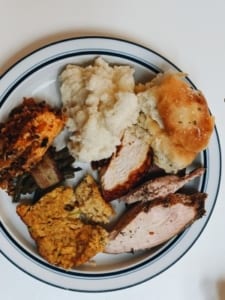 Reading the figures in Foer’s book suggests we aren’t the only family clinging to tradition.  Even as we Blasbergs are accepting of change and differences in other aspects of our lives, I was surprisingly suspect of letting change creep onto my Thanksgiving table.  I mean it’s not like we weren’t going to have the turkey too… John just suggested adding a dish. You may accuse me of just wanting to read all afternoon (true), or avoiding the additional dishes that would need to be washed (true), but there was certainly something about the aesthetic of a brown log, and the taste (soy sauce??)…  and the feeling like I didn’t want to risk even one little crack in our tradition. Maybe there was also a tinge of that fear that since my children have all left home there might be a time when they don’t return – “she actually made a vegan meatloaf one year.”

I’m guilty of blowing apart various aspects of my children’s lives, but I’ll draw the line when it comes to Thanksgiving.  Plant-based, low-carb… forget about it or pick around it. God forbid I fall into the category of a family member who once insisted our only stuffing option be gluten-free…  My family has a long memory when it comes to such transgressions and can be pretty unforgiving. No, a vegan meatloaf wasn’t happening on my watch. We vegetarians would survive on side dishes (and a guaranteed late night snack).